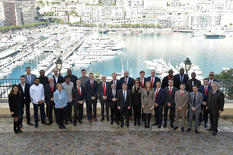 The A.S. Monaco Basket management team and players were today invited to the Residence of the Minister of State in the context of the partnership agreement between the Government and A.S. Monaco Basket SA on governance and communications. The purpose of the agreement is to support the club’s sporting ambitions, to enable the team to spread the “Monaco” message, and to offer assistance in its relationships with its competitors and the governing bodies of French and international basketball.

This annual meeting allows both parties to discuss their respective roles and efforts in order to further strengthen the links between them and to present the full Roca Team to members of the Government.

During his speech, H.E. Mr Serge Telle offered his encouragement to the team in advance of the Leaders Cup (16–18 February), where the Monegasques will be defending their title.

He then congratulated the players and staff, and concluded his address by emphasising that the Government and the country were extremely proud of their team, who do a fine job of representing the Principality on the European stage.

A.S. Monaco Basket is currently at the top of the Pro A league and has qualified for the last sixteen of the Basketball Champions League.