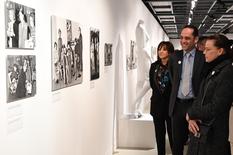 From today, the Monaco Red Cross is presenting an exhibition at the Quai Antoine I Exhibition Centre, retracing 70 years of its activity.

This retrospective was inaugurated in the presence of H.S.H. Princess Stephanie, the Vice-President and Secretary General of the Monaco Red Cross, members of the Prince's Government and many dignitaries.  It features previously unpublished archival photographs, videos, artefacts and works of art.

Admission is free and open to all. The exhibition runs until 3 March, from Tuesday to Sunday, between 1 p.m. and 7 p.m.

Various events will be organised throughout 2018 to celebrate the 70th anniversary of the founding of the Monaco Red Cross.

Additionally, in conjunction with this exhibition, a stamp bearing the effigy of the four successive Presidents has been issued by the Stamp Issuing Office.  It will be on sale from 3 March.