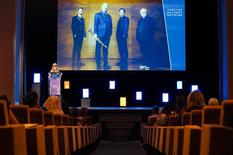 Françoise Gamerdinger, the Director of Cultural Affairs, presented the Department of Cultural Affairs’ summer season at the Théâtre Princesse Grace yesterday, before an audience of senior officials, representatives from cultural institutions and the press.

The 51st Fort Antoine Theatre season (29 June to 6 August) and the 15th Monaco International Organ Festival (27 June to 15 August) are set to punctuate the summer with, respectively, 14 evening performances and 7 concerts at the Cathedral, including an accompanied film screening.

In addition to the theatre programme, which will allow audiences to discover some pieces that have been specially adapted by the companies involved for this unique setting, the Department of Cultural Affairs has invited the Printemps des Arts Festival, the NMNM, the Prince Pierre of Monaco Foundation, the Monaco Audiovisual Institute, Philosophical Encounters of Monaco, Théâtre Princesse Grace and the Monte-Carlo Philharmonic Orchestra to perform on the stage at Fort Antoine. It will be an eclectic programme, featuring screenings, concerts, solo performances, a conference and a very special evening paying tribute to Jean-René Palacio, who helped to design this programme in collaboration with the Société des Bains de Mer de Monaco.

Original programmes on the theme of the “Shared Organ” were unveiled by Olivier Vernet, the Artistic Director of the Monaco International Organ Festival. The Festival will be an opportunity to present the latest recordings made of the Cathedral organ, which is celebrating its tenth anniversary this year, with a special concert planned to mark the occasion. In partnership with the Monaco Multimedia Library, a signing session with Claude Passet and Silvano Rodi, the authors of Grand livre de l’orgue à Monaco (The Big Book of the Organ in Monaco) will be organised at the Louis Notari Library.

Full information is available from the following websites: