Photography exhibition: “The Principality of Monaco – Biodiversity under Close Surveillance” Until 23 February at the Galerie des Pêcheurs 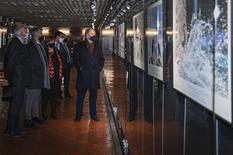 The photography exhibition “The Principality of Monaco – Biodiversity under Close Surveillance” was officially opened on Monday 25 January in the presence of H.S.H. Prince Albert II and Marie-Pierre Gramaglia, Minister of Public Works, the Environment and Urban Development.

The exhibition, which will run until 23 February at the Galerie des Pêcheurs, showcases the wealth of biodiversity in Monaco through images of heritage species (flora and fauna) photographed in their natural environment. Created by photographer Jean-Charles Vinaj with backing from the Department of the Environment, the exhibition is drawn from a book of the same name, which was officially launched at the opening.