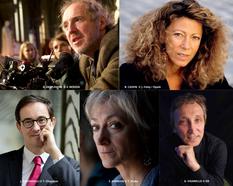 For its 2021 season, the Prince Pierre of Monaco Foundation is demonstrating its determination, which is stronger than ever in these uncertain times, to facilitate engagement with those who create art, culture and history, inviting them to share their experience, motivations and commitment with their audiences.

As it has done consistently for nearly 100 years, the Foundation was once again keen to seize opportunities for communication, discussion and sharing as they presented themselves. It is offering three events in Monaco, on 25 January, 15 February and 22 March. External conferences remain on the programme and are scheduled for 4 February and 8 April 2021 at the Maison des Océans in Paris.

Cinema: an art of ellipsis

We sometimes imagine the role of the cinema to be that of showing people, bodies, places, actions, relationships – a whole package where the viewer’s enjoyment is said to be the pleasure of watching without being seen. The work of a director might therefore be said to largely involve creating a plausible fictional world in which the viewer can believe or even one that they can identify with.

Using clips from his films to illustrate his points, Arnaud Desplechin will talk to Jacques Kermabon about the specific challenges of this confrontation with filmed content as it is found on a film set, before reaching its final form through the editing process.

This conference is being organised in partnership with the Audiovisual Institute of Monaco.

So who was Vinteuil?

Although Marcel Proust did not even give him a first name, the composer Vinteuil nonetheless occupies an important place in the novel In Search of Lost Time (also translated into English as Remembrance of Things Past). The character enables the author to illustrate two themes close to his heart: through his bold works, Vinteuil demonstrates that the particular role of the artist is to look at the world through fresh eyes; through the contrast between his quiet, well-ordered life and the bewitching charm of his art, he confirms that an artist’s life bears little relation to his genius.

But which musicians did Proust have in mind when he created this character? Drawing on the hints that the author himself left in his correspondence, as well as accounts from those who knew him and recent research on the place of music in his writing, Jérôme Bastianelli will review each of the possible “candidates”, including the most unexpected options.

Each portrait will be illustrated with a short piece of music to help the audience imagine what the famous Vinteuil Sonata might have sounded like.

The acoustics of writing

In writing, as in any artistic creation, there is a degree of polyphonic resonance: everything that we write, everything that we create comes from the traces and echoes left in us – in our memory, our sensibility, our thinking and our imagination – by what we have read, what we have heard, the paintings, films, works of choreography and architecture that we have seen and contemplated, the pieces of music that we have listened to... Any unique voice is fed and watered by a murmur that has swelled since childhood and even earlier, from distant times to the present, shifting and forming a soundtrack around us.

There is, in writing, a particular depth of resonance: a writer’s language always precedes the writer themselves by several centuries, it overwhelms and completely surpasses them. Language, the highly fluid, intangible material of the writer, conceals a very dense memory. Each word has a history, a genealogy that is sometimes very old, complex and rich in detail, and some terms have a very wide vibration amplitude.

It is these various resonances that wind their way through any writing, as well as the silences that accentuate and punctuate them, that this conference seeks to examine.

Developments in philosophy: experiencing the differences between languages

While it is difficult – even impossible – to define precisely what a philosopher is, their careers always provide an insight into what has motivated them and continues to guide their thinking. During this conference, Barbara Cassin will share her work on language differences. She will talk about her relationship with language, languages and translation, based on a series of experiences and using as her starting point her love of Greek and the surprising pleasure she draws from translation, between poetry and philosophy.

This conference is being organised in partnership with Philosophical Encounters of Monaco.

Reviving hygiene standards in the 20th century: the contributions of Prince Albert I of Monaco

At the beginning of the century of Prince Albert I, Monaco was exemplary in its adoption of hygiene practices and advocacy of cleanliness. The country’s approach was considered to be strikingly modern.

The Prince’s most distinctive hallmark was his influence on international thinking. His opening address at the Congress of Monaco on promoting the development of the spa, seaside, climate and alpine resorts of the allied nations in 1920 focused the agenda on regaining the momentum with regard to sanitary standards, which had been severely compromised by the Great War, and on studying in depth the resources of the sea, an area in which he was a pioneer. He sang the praises of water and sunlight, denounced poorly managed industrial facilities and emphasised the importance of research for wellbeing and progress.

This conference is being organised to commemorate the centenary of Prince Albert I of Monaco’s death.