Celebrating Saint Patrick’s Day yesterday (a day early), the Princess Grace Irish Library in Monaco hosted an afternoon of music and singing in the presence of H.S.H. Prince Albert II and His Children Hereditary Prince Jacques and Princess Gabriella.

The event was filmed and will be available for replay on their website.
On the programme:

• A harpist, three harpsichordists and a singer regaled the audience with traditional Irish airs, including the famous Molly Malone tune, music by Irish composer Turlough O’Carolan and arrangements by Janet Harbison, Ireland's award-winning 'Queen of the Harp'.
• The afternoon ended with a presentation of apple tarts, decorated with shamrocks, made by pupils from the Lycée Technique & Hôtelier de Monaco. 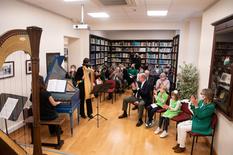 H.S.H. Prince Albert II and guests also enjoyed the photo exhibition of the 2021 visit to Ireland by the Sovereign Prince and His children.
Director of the Library Paula Farquharson took the opportunity to announce the prolonged duration of the exhibition until April 30th. Highlights include a ceremony at Trinity College Dublin, where a frieze was unveiled with the name of H.S.H. Prince Albert II as a benefactor. The Sovereign’s donation contributes to the restoration project of Trinity’s ‘Old Library’. A working library since 1732, it is home to over 200,000 ancient books, including the celebrated ‘Book of Kells’. At the PGIL visitors can see a beautiful facsimile of this medieval Irish manuscript from the 9th century.

• Thursday March 17th - enjoy a warm Irish welcome as the library is hosting a 'pop-up' day for St Patrick's Day. Just pop in (no reservation needed) and soak up the ambiance, peruse the beautiful collections, listen to traditional Irish music, watch films on demand about Ireland, or just drop in for a chat. Children will also have fun.

• Tuesday March 22th - a reading by children’s author Marianne McShane from her beautifully illustrated book ‘Rónán and the Mermaid’ - a secret tale of ancient Ireland.

• From April 4 th – visitors to the PGIL can view the first edition copy #312 of ‘Ulysses’ by James Joyce (1922) – it is currently on loan to the Centre Culturel Irlandais (CCI) in Paris, where it features as the centrepiece of a display to mark the centenary of its publication on 02/02/1922, not in Dublin but in Paris by Shakespeare and Company.
https://www.pgil.mc/lectures/current

The PGIL team and trustees wish to thank the following for their support:

About the Princess Grace Irish Library
The PGIL was inaugurated on 20th November 1984 by Prince Rainier III of Monaco as a tribute to his wife Princess Grace and the attachment she felt for her Irish origins. Her grandfather John Kelly was born in county Mayo in Ireland in 1847 and aged 20 years old, set sail for America.
Among the collections is Princess Grace's personal collection of Irish books and Irish-American sheet music, as well as photos and art works. Currently on display is a new photo exhibition of the visit to Ireland in September 2021 by HSH Prince Albert II, Hereditary Prince Jacques and Princess Gabriella.
The Library is under the ægis of the Fondation Princesse Grace with President Princess of Hanover and H.S.H. Prince Albert II as Vice-President.
www.pgil.mc