[Talk]: Cinema - An Art of the Ellipse Arnaud Desplechin Interviewed by Jacques Kermabon

The Prince Pierre Foundation is presenting a meeting with Arnaud Desplechin, in association with the Monaco Audiovisual Institute.  In the company of Jacques Kermabon, the filmmaker will discuss the issues that motivate him and his vision of a film shoot, and will illustrate his remarks with extracts from his films.  A rare, intimate discussion with one of French cinema's most talented directors, on Monday 25 January at 3 p.m. at the Variety Theatre, Monaco.

This talk will be broadcast live on the chaîne Youtube de la Fondation Prince Pierre. 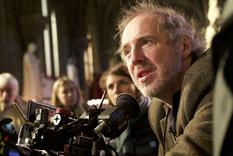 One might sometimes imagine that the role of cinema is to show people, bodies, places, actions and relationships – a whole ensemble, in the face of which the viewer's pleasure is linked to the pleasure of seeing without being seen.  The work of directing would thus largely consist of creating a plausible world of fiction in which the spectator could believe, or with which they could identify.  In the beginning, there is usually a script;  each filmmaker makes use of this text, of which he or she is sometimes the author, in his or her own way.

"When we make something," says Arnaud Desplechin, "we do so with intuition, and what is primordial for me are the actors;  the placement of the cameras is linked to not hindering them, not doing too many takes, but enough.  There are many strategies that are put in place - it's like the stage of a theatre."

One of the challenges of directing may therefore appear more as a desire to probe mysteries rather than to provide answers, to suggest rather than to affirm.  The work of the film is less concerned with creating a visible world than making it felt through ellipses.

Arnaud Desplechin was born in Roubaix in 1960 and joined the IDHEC in 1980. In 1991, he made a sensational entrance into French cinema by directing, a few months apart, "La Vie des morts" (1991 Jean-Vigo Prize) and "The Sentinel" in competition at Cannes in 1992.  These were followed by “My Sex Life... or How I Got into an Argument" and "Esther Kahn," his first English-language film.  He was awarded the Louis-Delluc Prize in 2004 for "Rois et Reine," which was a great success with both the public and critics.  This success was repeated with "A Christmas Tale” (2008).  In 2012, he directed his first film in the United States, "Jimmy P. (Psychotherapy of a Plains Indian)," based on a book by George Devereux.  "“My Golden Days” earned him a César for best director in 2016.  “Ismael's Ghosts” opened the 2017 Cannes Film Festival, out of competition, while "Oh Mercy!" was in competition for the Palme d'Or in 2019.