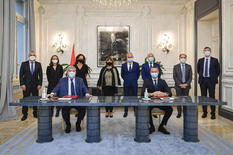 H.E. Pierre Dartout, the Minister of State, and Thomas Battaglione, SMEG Chief Executive Officer, acting on behalf of the SMEG/SOGET/MES group, signed the concession agreement for the ocean thermal energy loops in Larvotto and Condamine on Monday morning. Marie-Pierre Gramaglia and Jean Castellini were also present for the signing ceremony. Under this 30-year contract, the Monegasque companies will operate and market the facilities, which are currently under construction.

The Minister of State delivered some introductory words, welcoming what he described as “a major, tangible step on the long route to energy transition that the Principality has embarked upon.” He added: “environmental issues are high on the agenda for which the Sovereign Prince has given me responsibility. The Principality has set a target of reducing its CO2 emissions by 50% by 2030, and we want to achieve carbon neutrality in 2050. These two ocean thermal energy loops will make an important contribution to achieving this.”

Thomas Battaglione said: “We are proud to be leading this project with our partners. It is a demanding and very laudable project that will help to reduce the use of fossil fuels and contribute directly and significantly to the country’s energy transition. Specifically, following the first major phase of work, Monaco will be able to rely on local capacity of around 35 GWh of zero-carbon energy, saving 6,025 tonnes of CO2 and serving 3,500 homes.”

The buildings in these two districts which will be connected to the network will be equipped with heat pumps that will supply hot water, heat and air conditioning, while consuming very little electricity.

The two loops cover a connectable area of 200,000 m2, or nearly 7% of the total useful floor space of buildings in Monaco (for the 3/4 in Larvotto).

It is worth remembering that Monaco’s expertise in heat pumps dates back to the 1960s. The Principality was one of the first countries to develop this kind of renewable energy on its coastline, installing its first seawater heat pump at the Rainier III Outdoor Swimming Stadium in 1963 to heat the water for the pool.

There are now more than 80 seawater heat pumps throughout Monaco (among the most iconic are those at Grimaldi Forum, the Oceanographic Museum, the Rainier III Auditorium and SBM’s hotels and restaurants). In addition, Fontvieille has had a similar network serving businesses and around 2,000 homes in the district for a number of years.