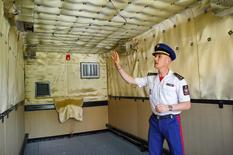 A container for handling incidents involving alternative energy vehicles was installed at the Fontvieille Emergency Response Centre on Wednesday 25 May, in the presence of Patrice CELLARIO, the Minister of the Interior, Colonel Tony VARO, Supreme Commander of the Military Force, Lieutenant-Colonel Maxime YVRARD, Chief Officer of the Monaco Fire and Emergency Service, and Serge DESCHAMPS, Technical and Commercial Manager for SULITEC Group.

Developed by the Monaco Fire and Emergency Service in partnership with SULITEC Group, the container has been designed on the basis of a shipping container in line withan operational concept which can be summed up in three words: Isolate – Control – Treat. The container, which is truly unique, is smart and equipped with sensors. It is heat-insulated to enable it to withstand temperatures that can reach 1,100 °C. Bringing this container into service is entirely consistent with the Safe City concept that the Sovereign Prince has advocated, and offers a response to the risks associated with the growth of alternative energy vehicles in the Principality, which now account for 12% of all registered cars. It will help to maintain a high level of safety while at the same time promoting the energy transition. During the Grand Prix, the container will make it possible to deliver an operational response to the specific risk presented by hybrid vehicles, and therefore improve safety during the races, which are unlike those on any other circuit.

Specifically, if there is an incident involving a battery pack in a professional or private vehicle, the vehicle is covered with an insulation blanket that protects firefighters from electrical risk, isolates the vehicle from the ambient air and captures toxic emissions. The vehicle is then taken away from populated areas by tow truck and loaded into the container with a winch. Inside this container, equipped with thermal insulated walls and multiple sensors, an automatic extinguishing device that uses solid microparticles is triggered at a pre-set temperature to stop the runaway chemical reaction. The container can also be used to treat the toxic fumes emitted by faulty batteries and any liquid waste resulting from extinguishing the fire.

The container will be in place at the Fontvieille Emergency Response Centre throughout the Grand Prix before being moved to a permanent location in the Principality.