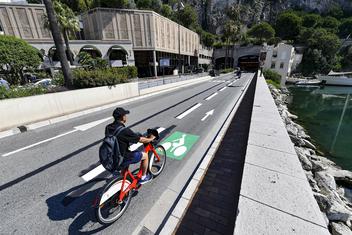 The Department of Urban Amenities has recently completed a new bike lane linking Fontvieille and Port Hercule via the tunnel under the Rocher. Emerging onto Quai Antoine I, it allows cyclists to access Boulevard Albert I and Route de la Piscine.

“Bicycles and personal transporters, such as electric scooters, are increasingly popular ways of getting around Monaco. They offer new everyday travel solutions,” emphasised Marie-Pierre Gramaglia, announcing the creation of this new cycle route.

In addition to existing cycle paths, such as the one on Avenue Princesse Grace, for the last several days bus lanes have also been open to bikes and electric scooters, meaning that there are now 1.7 km of cycle lanes throughout the Principality.

It should be remembered that the wearing of helmets is mandatory for under 18s and strongly recommended for everyone else. In addition to helmets for under 18s, those riding electric scooters must also wear retro-reflective clothing or devices.

Non-powered personal transporters such as skateboards, roller blades, non-powered scooters and cycles can be used in many shared public spaces, such as Place d’Armes, Promenade Honoré II, Quai Albert I, Rue Princesse Caroline and outside market opening hours in La Condamine – a total of 2.4 km .

In the field of soft mobility, Monabike, the electric bike service, has enjoyed huge success since it was first established, with an average 1,200 uses every day and peaks of up to 1,600 uses per day.

With 32 stations and 300 bikes introduced last year, and in accordance with the road map for rolling out Monabike, in a few days’ time, three new stations will be operational and eight further stations will be built in autumn. This means that before the end of this year, Monabike users will have access to 43 stations, nearly 400 bikes and more than 650 docks.

Beyond this highly successful electric bike service, cycling plays an important role in the Principality, and there is now nothing hindering the use of bicycles in Monaco’s streets.

This soft mobility option is also encouraged through the provision of a government subsidy scheme for electric bikes, worth 30% of the purchase price, including tax, up to a maximum of €400. 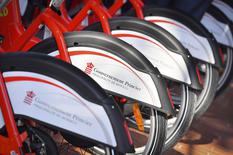