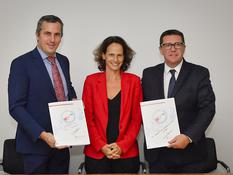 The first unions have signed up to the National Energy Transition Pact: Cédrick Lanari and Thierry Loutre, President of the Monaco Federation of Employee Trade Unions (F2SM) and Secretary-General and Founder of the Monaco Union for New Information and Communication Technologies (SMNTIC) respectively, both formally joined the movement on Friday 25 October.

The signing ceremony took place at the F2SM offices, in the presence of Annabelle Jaeger-Seydoux, Director of the Mission for Energy Transition, and her team, as well as the secretaries of the unions concerned and members of the Bureau.

Expressing his pride as the F2SM, which has nearly 800 members, joined the National Pact, Cédrick Lanari declared himself ready to “lead the way” and to accelerate the momentum by getting the 10 unions that make up the Federation involved in the movement too, ensuring that the commitment will apply at all levels.

For its part, the SMNTIC made commitments on mobility and on going paperless – the union does not publish leaflets, for example. In addition, it has this year set itself the goal of having its website hosted by Monaco Telecom, which is also a signatory of the Pact.

The National Pact, introduced in 2018 by the Mission for Energy Transition, seeks to engage the Monegasque community in efforts to achieve the greenhouse gas reduction targets set by H.S.H. the Sovereign Prince.

Look out for further reporting on Monaco Info and the social media pages belonging to the Government and the Mission for Energy Transition – www.facebook.com/MTEMonaco.