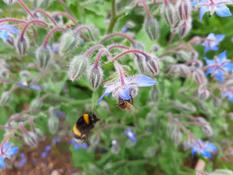 Since 2018, the United Nations has designated 20 May as World Bee Day, giving all bees the chance to be queens for a day.

Bees – both domestic and wild – help to ensure the survival of species.

European honey bees (Apis mellifera), which produce honey and live as part of a colony in an apiary, are very different from wild or solitary bees, who take sole responsibility for the survival of their progeny. What the two kinds of bee do share in common, however, is that they help species to survive. It is worth remembering that there are 20,000 recorded species of bees on the planet, including nearly 1,000 in France alone.

In 2011, as part of its efforts to support biodiversity, the Prince’s Government, in collaboration with the Union Nationale de l’Apiculture Française (UNAF, French National Union of Beekeeping), set up an apiary comprising around 10 hives on the roof of the Museum of Philately and Coinage in Fontvieille. The apiary is maintained by staff from the Department of Urban Amenities, who work closely with a consulting beekeeper.

In June every year, as part of APIdays, workshops on honey production are organised to help the public learn more about the life of an apiary. In 2019, the apiary produced 128 kg of honey (harvested in June and September).

In parallel, since 2013 bee hotels have been installed in collaboration with French National Forests Office (ONF). One of these can be found in the St Martin Gardens. These hotels were set up to meet several objectives: educational – to raise public awareness about wild bees; scientific – since this type of bee is little understood by scientists; and conservational – by providing a nesting site, we are helping to promote the continuity of species.

Bees and pollinators to the rescue of plants!

World Bee Day on 20 May is also an opportunity to remember the key roles played by pollinators like bees (others include wasps, hornets, bats and birds). It is important to emphasise that pollinators contribute to food security and are also critical to safeguarding the biodiversity of plant species, with 90% of the world’s flowering wild plants dependent on the pollination process.

The theme for World Bee Day in 2020 is Bee Engaged, so if you would like to get involved in your own way, you can send your best drawings to us at amenagement@gouv.mc, including “Bee engaged” in the subject line.