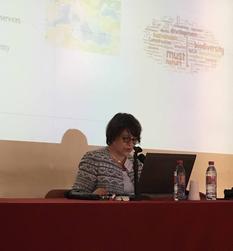 Ms. Isabelle Rosabrunetto, Director General of the Ministry of Foreign Affairs and Cooperation, accompanied by Ms. Chloé Petruccelli, Secretary of Foreign Affairs, took part in the opening session of a scoping workshop by the MedECC initiative*, held on 10 October 2016 in Aix-en-Provence.

MedECC, which benefits from financial support from the Prince's Government, is an open, independent network of international experts and scientists who are working to implement a science-policy interface for environmental issues throughout the Mediterranean.

In her speech, Ms. Rosabrunetto highlighted the scale of the environmental threats faced by the Mediterranean, emphasising that this region, a priority action area for the Prince's Government, is currently in a particularly vulnerable situation.

Recalling the strong, longstanding links between the Principality and the scientific community of the sea, the Director General of the Ministry affirmed that the Prince's Government is firmly committed to MedECC's objectives, namely to strengthen coordination between Mediterranean researchers and facilitate access to scientific data.

She concluded by expressing the wish that MedECC would be able to remove the barriers that can exist between the scientific world and that of decision-makers, so that ambitious political choices can ensure a sustainable future for our region.

*The MedECC network - Mediterranean Experts on Climate and Environmental Change – is comprised of almost 200 researchers from 21 countries, whose aim is to provide high quality scientific information on "environment and climate" issues.