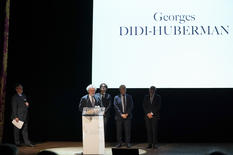 The 2019 Principality's Prize was awarded jointly on Tuesday 15 October by the Monaco Philosophical Meetings and the Prince Pierre of Monaco Foundation to Georges Didi-Huberman, for the whole of his work.

The winner of the Principality's Prize is invited to give a lecture in the year following the awarding of the Prize.  Georges Didi-Huberman's magisterial lecture will be given on Monday 27 January 2020 at 7 p.m., at the Maison des Océans, 195 Rue Saint-Jacques, 75005 Paris.

The Prince Pierre Foundation and the Founding Members of the Philosophical Meetings jointly undertake to award the Principality's Prize each year to an author for his or her entire philosophical work.  This will thus pay tribute to a lifetime of philosophical writing, outstanding work that has opened up new paths in the field of philosophy and taken different approaches to science, politics, theology, history, anthropology, ethics or psychoanalysis.

Georges Didi-Huberman is a philosopher and art historian and Emeritus Director of Studies at the Ecole des Hautes Etudes en Sciences Sociales (School for Advanced Studies in the Social Sciences), which he joined in 1990 after teaching at the University of Paris-VII for many years.  He has curated numerous exhibitions in France and abroad and is the author of fifty or so books, which have won him several prizes, including the prestigious Adorno Preis in Frankfurt.

His research focuses on the history and theory of images from the Renaissance to contemporary art, with the aim of opening up new perspectives on the issue of the ethics of the gaze.  In addition, he is undertaking a process of reflection on "uprisings," with a view to giving the "voiceless" and the "disinherited" a voice that can weaken our societies' amnesia.