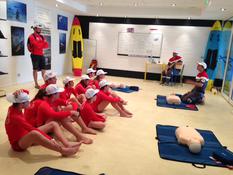 On 12 June 2017, seventy Year 7 pupils from the Collège Charles III and the Collège François d'Assise-Nicolas Barré took part in Water Safety Day, encouraged by H.S.H. Princess Charlene, who honoured them with Her presence.

This annual event is organised by the Princess Charlene of Monaco Foundation and held at the Monaco Aquatic Rescue Centre, in association with the Department of Education, Youth and Sport.

The aim of the day is to draw the attention of young people to the dangers of water and introduce them to preventive measures to avoid these dangers.

The students took part in a team race, accompanied by their Physical and Sports Education teachers, alongside celebrities from the world of sport, during which, in particular, they received training in the use of a tube buoy and nipper board.

Following this "Celebrity Race," the pupils took part in a variety of awareness-raising workshops led, among others, by the Monegasque Red Cross and the "Cap ô Pas Cap" association.

For the second year, pupils from the Principality showed great enthusiasm for this excellent initiative, which took place in a fun, sporting atmosphere.

Finally, as a reminder, in the Principality, rescue at sea has been organised as a school activity since the start of the 2014 school year, as part of the Physical and Sports Education courses for Year 8 pupils. 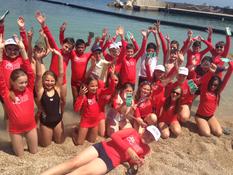