The Forbidden City at the Grimaldi Forum

This summer’s major exhibition at the Grimaldi Forum Monaco captured imaginations and drew a record number of visitors. In total, 47,000 passed through the doors to see Beijing’s Forbidden City, and experience the opulence and grandeur of the last Chinese imperial dynasty, the Qing (1644 – 1911). 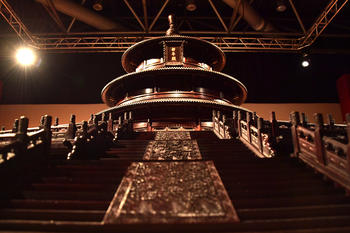 Some 250 exhibits from the former palace of the emperors took the public on a voyage into the heart of this symbolic place that is part of China’s collective memory and home to a priceless heritage. The exhibits were on loan from major European and American collections including the Cernuschi and Louvre museums in Paris, London’s Victoria & Albert Museum, the Royal Museums of Art and History in Brussels and the Arthur M. Sackler Gallery in Washington.

Designed as a stroll through the palace into the gardens, the itinerary took visitors into iconic places such as the Temple of Heaven, Throne Room, Buddhist temple, the Ancestors Temple and the tea pavilion, immersing them in a civilization that is thousands of years old. 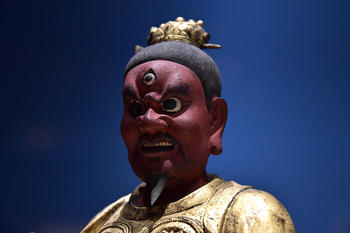 The exhibition focused on the personalities of the Qing emperors and was curated by Jean-Paul Desroches, honorary curator, and Wang Yuegong, Director of the Arts Department in the Imperial Palace Museum. Portraits, ceremonial costumes, furniture, precious objects and scientific instruments, some national treasures, offered a glimpse into their world. In the tradition of the Manchu people, whose powerful army known as the Eight Banners took control of China in 1644, military conquests by the Qing emperors were also represented by various objects and engravings illustrating their campaigns.

During the Qing reign, culture was all-important as reflected in the official taste for one of the high-points in the history of Chinese civilisation. A wide variety of art forms which had a major impact on the West at the time were highlighted, including calligraphy, painting and the decorative arts, with cabinets of porcelain and lacquerware, as well as music and opera.

And we already know the theme for the 2018 summer exhibition: Pharaohs Gold, with the Cairo Museum loaning no fewer than 150 items from its collections. An opportunity to skim through 2,500 years of history from a new angle, that of the silversmith, curated by Christiane Ziegler who was responsible for the memorable Queens of Egypt exhibition at the Grimaldi Forum in 2008.