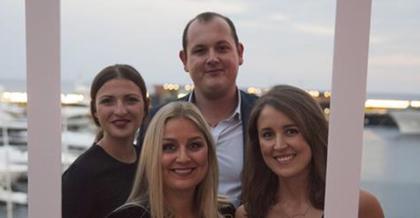 On October 7th, IUM celebrated its 30th anniversary with its alumni at the terrific Monaco Yacht Club.

To celebrate IUM’s 30th anniversary, as good IUM alumni, they flew from all around the world from twenty different countries: US, Dubai, Germany, UK, Belgium, Italy, to name a few. As did the “Locals” who crossed the road to attend this important event! The IUM staff and faculty also joined the party to meet with their former students, share memories and get some updates.

Among the guests, we had the chance to welcome an alumnus from the 1st cohort of the International University of Monaco who started his Bachelor 30 years ago and graduated in 1988.

Indeed, the International University of Monaco opened its doors in 1986 with thirty five students enrolled in two programs (Bachelor of Science in Business Administration and MBA). Since then, a lot has been achieved: Association of MBAs (AMBA) accreditation in 2005, launch of five different master degrees between 2008 and 2012, launch of the AMAF Certification, and the signature of many partnerships with prestigious companies (such as Barclays bank) and other universities (the most recent one  has been signed with MGIMO University in Moscow). More recently, a new course in Yachting Management has been launched within the MSc in luxury Management program in cooperation with the Yacht Club of Monaco.

30 years later after its opening, the International University of Monaco offers four specializations at the Bachelor level, five master programs (finance, luxury and management with several tracks), an AMBA accredited MBA and a DBA and welcomes now more than six hundred students.

On Friday, many memories from the past 30 years came up. Hugs, kisses, shaking hands: the room was full of joy and laughter. Remembering the good old days, catching up, old friends, new friends were the order of the evening.

But above all we all had the feeling that the IUM Alumni Community is still a family, even after such a long time. #IUMforLife