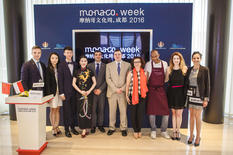 The third Monaco Week in China was held in Chengdu, capital of Sichuan Province. A true showcase of the country’s economic development, this was an obvious choice in which to promote the Principality to a clientele with high purchasing power.

The “Monte-Carlo Lifestyle” was showcased by the Tourist and Convention Authority and various Monegasque speakers, with Chef Marcel Ravin of the Monte-Carlo Blue Bay, who helped to create several lunches and dinners, highlighting fine dining.

The Monaco Yacht Show and Yacht Club de Monaco teams talked to potential clients about the importance of yachting, a key activity for the Principality.

The Prince Albert II Foundation presented the actions being taken in the field of environmental protection throughout the world and specifically in China. A visit to the Chengdu Research Base of Giant Panda Breeding provided an opportunity to set out the Foundation’s commitment to the conservation of endangered species.

During the week, a stand set up in International Finance Square, a luxurious, ultra-modern complex in the city, gave visitors a chance to discover Monaco through films, photographs and QR codes linking to dedicated websites.

Monaco Week concluded with a “Casino Royal”-themed gala evening at the Niccolo Hotel by Marco Polo. Chef Marcel Ravin prepared an exceptional dinner for the 200 guests invited by the event’s various partners.

An invitation was issued for the 4th China Night, which will be held at the Yacht Club de Monaco on 30 September 2016. 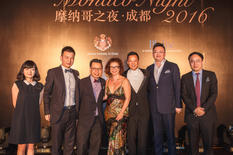