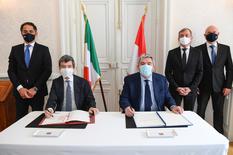 On 10 May 2021, H.E. Mr Pierre Dartout, the Minister of State, and Mr Andrea Orlando, the Italian Minister of Labour and Social Policies, signed Amendment No. 1 to the General Social Welfare Convention between the Principality of Monaco and the Italian Republic of 12 February 1982. The Amendment covers the introduction of teleworking for employees who work in the Principality and live in Italy.

This agreement defines the concept of teleworking and establishes the principle that teleworkers resident in Italy may be subject to Monegasque social legislation for the duration of their employment as teleworkers for a company based in the Principality, and vice versa.

Reaching this point, which is a real step forward for Italy and the Principality, required more than five years of discussions against the background of an economic situation, which recently became more difficult due to the COVID-19 epidemic. The epidemic did, however, lead to more extensive use of teleworking, which was successfully introduced extremely quickly by many businesses in the Principality, including for the benefit of employees resident in Italy, from the start of the lockdown period.

The increased use of teleworking should result in the creation of many jobs over the coming years, and will also help to reduce road traffic, thereby contributing to environmental protection efforts.

For employees who choose it, teleworking will improve their quality of life, reducing their commute so that they have more time for their personal lives.

This is a commendable agreement for both countries:

- for Monaco, it will help to expand business activity, resulting in additional tax revenue and social security contributions;

- for Italy, it offers an additional opportunity for residents of the border region to find work in the Principality.