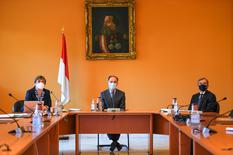 On Monday 22 March, Sophie Vincent, Director of Monaco Statistics (IMSEE), presented and analysed for the press a report on the economy in 2020. Minister of Finance and Economy Jean Castellini and Minister of Health and Social Affairs Didier Gamerdinger, who also attended the briefing, offered a reminder of the measures taken by the State to support the Principality’s economy and put it on the road to recovery.

Unsurprisingly, 2020 will be recorded as a sadly exceptional year for the economy. While circumstances during the summer and again over the end-of-year festive period enabled activity to resume and most economic indicators to recover, annual figures are down, adversely hit by performance in the second quarter.

The Quarterly Economy Bulletin is available online at monacostatistics.mc