Monaco takes part in 150th session of WHO Executive Board 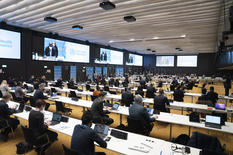 The 150th session of the World Health Organization (WHO) Executive Board was held in a hybrid format from 24 to 29 January 2022.

The session was marked by a vote in support of giving the current WHO Director-General a second term. This decision is set to be endorsed by the World Health Assembly next May. The session also featured discussions on strengthening WHO, notably with prevention and response systems to tackle future global health emergencies and pandemics. Debates on budgetary issues, sustainable financing and governance of the organisation also formed an important part of the session.

The Monegasque delegation was led by H.E. Ms Carole Lanteri, Ambassador and Permanent Representative of Monaco to the Office of the United Nations in Geneva.

The Executive Board is one of WHO’s governing bodies. Comprising 34 elected members, it meets twice a year and its remit is to facilitate the work of the World Health Assembly by implementing its decisions and formulating recommendations for it to consider.

A member since 1948, Monaco contributes fully to setting WHO policy, by adopting positions on the organisation’s strategic priorities and by supporting the drafting and adoption of resolutions that are important to the Principality.