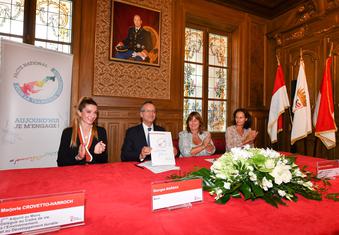 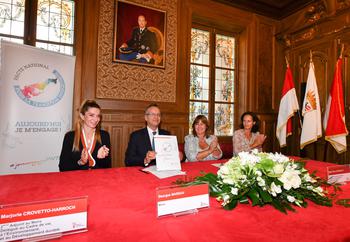 On Monday 8 October, Mayor of Monaco Georges Marsan signed the National Energy Transition Pact Commitment Charter. The objective for City Hall is to join the effort to achieve a carbon-free Monaco.

The signing ceremony was attended by Marie-Pierre Gramaglia, Minister of Public Works, the Environment and Urban Development, Annabelle Jaeger-Seydoux, Director of the Mission for Energy Transition, Marjorie Crovetto-Harroch, Deputy Mayor for Quality of Life, the Environment and Sustainable Development, members of the Council of the Commune, heads of municipal departments and environmental representatives from each of the departments at City Hall.

The National Pact, introduced in January, seeks to engage the Monegasque community in efforts to achieve the country’s greenhouse gas emissions targets: a reduction of 50% (compared with 1990 levels) by 2030 and carbon neutrality by 2050. “The commitment made by Monaco City Hall sends a strong signal to our compatriots. You are in daily contact with them and can therefore, through your undertakings, not only lead by example but also engage people in a positive movement to promote the energy transition,” said Marie-Pierre Gramaglia.

The tool comprises a Commitment Charter covering the three energy transition priorities: transport, waste and energy. There are also around a dozen action plans covering specific sectors (institutions, individuals, shops, property developers, architects, industries, etc.) and setting out the minimum mandatory actions as well as the impact these will have on avoided emissions. This allows everyone to understand what they can do in practice, at their own level and in their own field.

H.S.H. the Sovereign Prince was the first to sign up to the National Pact, followed by his Government. The Pact now has more than 500 signatories. 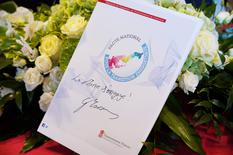