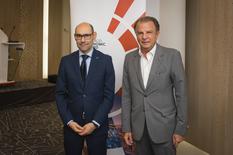 Lionel Galfré, Director of the Monegasque Institute of Statistics and Economic Studies and Michel Dotta, President of Monaco Economic Board © REALIS/SD

This morning, Monaco Economic Board (MEB) held a breakfast meeting, to which economic players from the Principality were invited.

Lionel Galfré, Director of the Monegasque Institute of Statistics and Economic Studies (IMSEE), was invited to speak at this event.

This was an opportunity for IMSEE's Director to illustrate how the specific and sometimes positive aspects of the Monegasque demography affect the country's economy, based on recent IMSEE publications such as the first results of the 2016 Census and the latest "Monaco in Figures" ("Monaco en Chiffres.")

At the end of the presentation, Lionel Galfré reminded the 70 or so entrepreneurs present that IMSEE's role was also to enlighten and support the Principality's economic players.