How would you define the NCHPG project?

This is an extremely complex project, both in terms of its location and the type of site involved, in addition to the requirements arising from the establishment's status as the only public hospital.  As such, the CHPG must be able to meet the changing needs of the population;  this requires both the latest  technology and a high degree of modularity in its technical platforms.  It must also able to deal with a health crisis, with 30% of rooms that can be doubled up, and natural disasters, such as storms and earthquakes.

This is a really unusual construction challenge, as the hospital is being built above two roads, and positioned next to existing hospital premises that will continue to operate for the duration of the work.

What advances and innovations will it bring to the Principality?

This building will be an asset for all residents of Monaco.  In addition to being a real architectural and aesthetic success, it will be functional, making for faster treatment, thanks to a more fluid and readable patient flow.  The technical platforms will be grouped together, in a more rational approach, and the capacity of the units will allow greater efficiency.

It will be a major asset in terms of accommodation, with single rooms throughout, almost 70% of which will have a sea view.  A comprehensive premium service will be provided;  the check-up unit will be expanded from three beds as at present to eight in the new building, and premium rooms will be available in all units (in comparison with two currently), so as to further contribute to the attractiveness of the Principality.

Finally, it will make it possible to group the various types of health treatments together in a single building, thus developing synergies between the specialist staff and making it possible to create and maintain more links.

Will it correspond to your vision of the hospital of the future?

That's the aim!  The project team's main concern is preventing the risk of obsolescence.  The programme for this building was written in 2010, for delivery, in a best-case scenario, 20 years later.  It is therefore a question of taking, or even envisaging, all the protective measures that will enable the future building to adapt to organisational changes and technical progress.

For example, when we drafted the programme, surgical robots didn't exist;  today, the CHPG is considering buying a second robot.  Who knows what will happen in 2030?

There has been concern about this risk of obsolescence from the outset of the programme, but it is still one of the major challenges, requiring us to undertake much future planning and make regular visits to the most modern buildings.  I must be able to anticipate changes in five years' time, in order to think of the protective measures that could potentially be useful in ten years' time!

With the focus on the construction site, how is the CHPG functioning?

At this stage in the project, the CHPG is relatively unaffected by the construction site, which is taking place in front of the hospital buildings.  All the exposed facades have been fitted with double glazing to protect patients and staff from much of the noise pollution.

We are also imposing stringent conditions for the smooth running of the operation, recalling that the technical specifications in the tender stipulated that the Avenue Pasteur should never be closed.  This is still an important aspect, which the Management is constantly monitoring.  The project must maintain accessibility to the CHPG and its functioning on an unconditional basis.

Can you describe your career background?

After obtaining a degree in Political Science and a DESS in Strategy and Commercial Management, I joined the Groupement Hospitalier de la Pitié Salpêtrière as an intern.  This experience was a revelation and enabled me to complete very comprehensive training at the Ecole des Hautes Etudes en Santé Publique, where I obtained the "Hospital Director" diploma.

I joined the CHPG on 1 April 2009 as Deputy Director responsible for Material Resources.  Gradually, I was entrusted with the management of major restructuring projects, such as the New Hospital, the New Cap Fleuri, the Tamaris consultation centre and the Check-up Unit.  I have also initiated some innovative projects in the hotel and restaurant sector, and in the field of sustainable development, where I created the "Green Hospital" approach, before taking up the position of Deputy Director in 2016, then taking over from Patrick Bini in July 2018 as head of the hospital.

What is your feeling after your first few months as head of the CHPG?

From a personal point of view, I would first of all mention a feeling of pride in having been selected by H.S.H. the Sovereign Prince, and also the support I have received from the hospital community.  This support is both a sign of trust and recognition of the work accomplished over the past nine years.  Even though there is great pressure, I look to the future with confidence, because I believe in the institution's ability to enter what will be a new era for medicine and public health with success.  This new era will be marked by the digital transition and a transformation of the organisations that will result from it.  It will also be marked by scientific progress on the genome, molecular biology and preventive medicine.

The CHPG has high quality staff, and the culture of the institution must be preserved to promote the values of good treatment and goodwill among the staff with regard to the essential organisational changes that we are addressing this quarter. 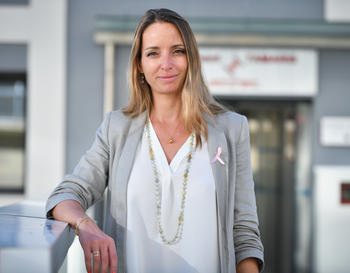 See the previous article on this topic:

Communication Department of the Prince's Government