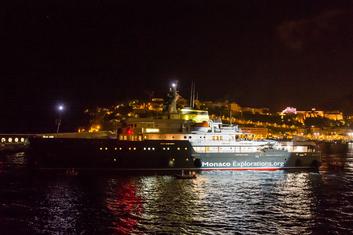 120 years after the explorations undertaken by Prince Albert I, who is regarded as one of the founders of modern oceanography, Monaco has recommenced scientific research at sea via Monaco Explorations, under the impetus of H.S.H. Prince Albert II.  The M/V Yersin, which serves as logistical and technical platform, set out from Port Hercule on 27 July for a three-year journey across the world's seas and oceans, with a threefold aim:  to study the marine environment, raise awareness and contribute to more sustainable management of the oceans through the results obtained. 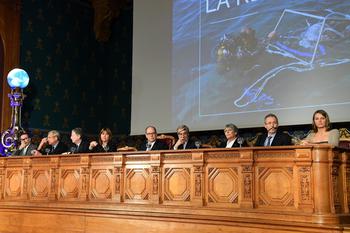 The Launch Conference for Monaco Explorations, in the
presence of H.S.H. Prince Albert II, at the
Oceanographic Museum on 4 April 2017.
© Manuel Vitali/Government Communication Department

"The decisions we have to make for the future of our planet are based on knowledge.  By reconnecting with the idea of scientific explorations at sea, we will offer new, practical elements that send messages of alert, raise awareness and promote education." In these words, H.S.H. the Sovereign Prince summarised the mission of Monaco Explorations.

Researchers from all over the world will be welcomed on board the Yersin;  they will be selected by a Scientific Steering Committee led by the President of Monaco Scientific Centre, Patrick Rampal.  The ship is multipurpose and modular and equipped with six laboratories, making it possible to travel, explore and teach in optimal living/working conditions and safety.  It's a real research base, capable of travelling the seas for 50 days autonomously, including ten days without discharging any waste products, in compliance with the "clean ship" classification. "In its design and operating conditions, this ship exceeds international regulatory requirements with regard to limiting its impact on the marine environment, in full conformity with the nature of these missions," explained its owner, François Fiat.

The first stage of the exploration campaign began in August 2017 in Macaronesia, around the archipelagos of Madeira and Cape Verde.  In this region, which Prince Albert I visited on eight occasions, the Monaco Explorations teams are taking part in programmes to protect endangered and threatened species (such as monk seals and turtles), the study of large marine animals and the unrecognised biodiversity of very deep seas.

Throughout these three years, the focus will also be on marine biology, molecular biology, ocean acidification, global warming, pollution and increasing the size and number of marine protected areas. 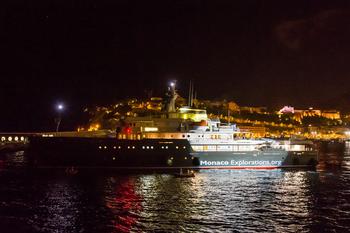 The Launch Conference for Monaco Explorations, in the
presence of H.S.H. Prince Albert II, at the Oceanographic
Museum on 4 April 2017.
© Manuel Vitali/Government Communication Department

Many scientists and technicians, operators of research submarines and measuring and sampling instruments will take part in turn, with up to 18 passengers aboard at any one time, as they will during the vessel's three-year trip to the Caribbean, the Pacific and Indian Oceans, the Black Sea and finally the Mediterranean.   The Yersin will return to the Principality in 2020.  During this round-the-world voyage, there will be an awareness-raising campaign aimed particularly at children, with the aim of involving this sector of the public more in protecting the oceans.

The head of these multidisciplinary missions, Robert Calcagno (Director General of the Oceanographic Institute), emphasises the predominant role of communication in the work carried out from the Yersin - "This campaign makes science and mediation inseparable.  Research programmes are selected not just for their contribution to knowledge, but also for their ability to disseminate this knowledge and send a message to decision-makers and the public."

With the active support of the Prince's Government, the Monaco Explorations programme aims to contribute to a better knowledge of the seas and oceans and attract the attention of the public and decision-makers throughout the world, to promote local and international conservation activities.

Marie-Pierre Gramaglia, Minister of Public Works, the Environment and Urban Development, explained the reasons for this support in terms of human, material and financial resources - "Under the authority of H.S.H. Prince Albert II, the Principality and the Government are pursuing an ambitious policy with regard to the oceans.  Whether this relates to local measures or the Sovereign's speeches at multilateral forums, this policy, with which Monaco Explorations is fully consistent, aims to reconcile Humanity and the sea."