At the 3rd Summer Youth Olympic Games held from 6 to 18 October last year in Buenos Aires (Argentina), the Principality was represented by five young Monegasque athletes. In addition to being the country’s largest ever contingent and putting in a competitive performance at the event, the delegation strengthened Monaco’s presence in the Olympic family and heightened the Principality’s international visibility through the values that it holds dear.

Although the International Olympic Committee (IOC) has, from the outset (see below), sought to make the Youth Olympics a less extravagant affair than the Olympic Games themselves, the intent was to create a major sporting event... And that’s exactly what the Youth Olympic Games have become, bringing together nearly 4,000 athletes from 206 countries in 2018 to compete in 239 events across 32 sports, all broadcast in more than 220 territories (not including the Olympic Channel and social media).

For a small country such as Monaco, participating in an event of this size offers a remarkable opportunity to shine. All the more so given that the country had never before sent so many delegates, that some of them were there to represent Monegasque beach volleyball for the first time, and that sprinter Charlotte Afriat and swimmer Emilien Puyo achieved great results (see below).

H.S.H. the Sovereign Prince, who – understandably as a five-time Olympian and member of the IOC since 1985 – views the Principality’s participation in the Youth Olympic Games as hugely important and thus naturally led the delegation, told Monaco Info that the competition was “a fantastic springboard for young athletes.”

For example, Monegasque Rudy Rinaldi, who won a bronze medal in the bobsleigh at the 2012 Winter Youth Olympic Games in Innsbruck (Austria), went on to take part in the 2018 Winter Olympics in PyeongChang (South Korea). And Pauline Ducruet has never lost her affinity for the Olympics after competing in the 3-metre diving event at the 2010 Summer Youth Olympics in Singapore. So it is inevitable that we will one day see the young Monegasque athletes from Buenos Aires flying the flag for the Principality at the 2024 Summer Olympics in Paris.

“As well as the competition, this is also an opportunity for them to familiarise themselves with the world of the Olympics and learn more about Olympic values,” H.S.H. the Sovereign Prince added. “Olympic values that they share with their fellow athletes from around the world,” H.E. Ms Yvette Lambin-Berti, Secretary-General of the Monegasque Olympic Committee (and Ambassador Extraordinary and Plenipotentiary and Permanent Representative to UNESCO), continued in a similar vein.

The aim of the Youth Olympic Games is to promote the values of excellence, pushing oneself, team spirt, solidarity, and respect for rules and one’s opponent among young people, and to raise their awareness of a healthier diet and lifestyle: all virtues taught in the Principality from a very young age by specialist staff with the aid of great sports facilities.

The fight against doping was also a focus of the cultural programme at the Youth Olympic Games. On this subject, it is worth noting that in March 2003, Monaco adopted the Copenhagen Declaration, by recognising and implementing the documents governing anti-doping efforts (in particular the World Anti-Doping Code), and by ratifying the Council of Europe’s Anti-Doping Convention in 2004. In addition, Monaco ratified the UNESCO International Convention against Doping in Sport (adopted in Paris in 2005) in 2007, and set up a Monegasque Anti-Doping Committee in 2003.

What are the Youth Olympic Games?

The Youth Olympic Games are a multi-sport event, much like the Olympic Games, but exclusively for young athletes aged 14 to 18 years old. They were established by the IOC in 2007, and the first event was held in Singapore in 2010.

The Youth Olympic Games alternate between summer and winter events, held every four years. The next summer games will be held in Dakar in 2022, and the next winter competition will be in Lausanne in 2020.

The Monegasque athletes and their achievements 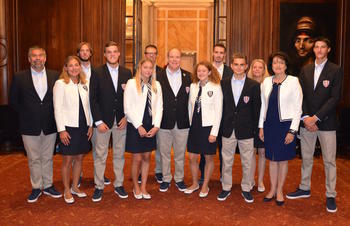