MonacoTech: the first programme for start-ups in Monaco

In partnership with Monaco Telecom and Xavier Niel, the Monegasque Government has established MonacoTech, the Principality’s first start-up incubator/accelerator. Set to open its doors in autumn, MonacoTech will enable the country to position itself as a credible centre of innovation, diversify its economy and boost the creation of value and jobs. 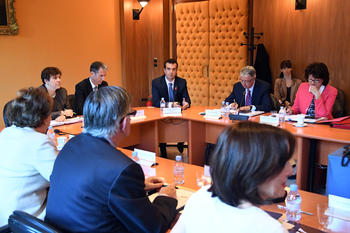 MonacoTech was presented by Director Fabrice Marquet
at the Diplomatic Conference (19 to 21 April), an
annual event at the Ministry of State bringing together
Monaco’s entire overseas diplomatic corps.
© Manuel Vitali / Government Communication Department

At the end of 2015 and beginning of 2016, the Prince’s Government conducted a review to consider how to develop new economic activities and support a transition towards the industry of tomorrow. One idea took root: creating an organisation capable of supporting innovative business plans and promoting the emergence of companies working in the new technology sector, and also able to ensure their sustainability, integrate them into the local economy and thereby generate indirect economic benefits. And MonacoTech was born...

In concrete terms, the programme is designed to provide assistance to companies both during the incubation period – for those which are not legally incorporated or have just recently been included in the Trade and Industry Register – and during the acceleration period (for more mature companies which are already generating some revenue).

Companies will thus benefit from support in terms of advice, monitoring, assistance and funding, thanks to the involvement of a specialist network (business angels, venture capital, banks, the Business Development Agency, etc.) and a dynamic ecosystem (stakeholders in the local economy).

Premises providing 820 square metres of open-plan space are currently being fitted out and will soon be made available for use by start-ups. The premises can accommodate around 20 companies (there are 60 desks) and will also offer a semi-public co-working space and two laboratories (desks will cost between €150 and €300, depending on the package).

As well as being an entry platform where start-ups can
submit their applications, www.monacotech.mc is an
informative website which presents the programme, the
resources available, the offer and the partners involved.

The start-ups and projects in question are selected by a jury made up of professionals and entrepreneurs. During the first session, nearly 70 projects from eight countries and sectors as varied as transport, fintech, greentech, smart devices, and the smart city applied, and five projects were selected. The second session is under way. Applications for forthcoming sessions should be submitted via www.monacotech.mc.

Funding for the MonacoTech project, which is supervised by the Ministry of Finance and Economy in close collaboration with Director Fabrice Marquet, is provided by the State, which owns the joint stock company SAM MonacoTech and the site (state-owned premises). It has also tasked several government departments with helping to develop and promote the programme.

The realisation of this project has also been made possible thanks to the advice and suggestions of Xavier Niel, who gained a certain amount of experience with the creation in Paris of Station F, the biggest incubator in Europe launched on 1 July, and to the involvement of Monaco Telecom. The communications provider has lent its management capacity and skills in highly complementary areas (finance, marketing, communications, legal, procurement, premises management, etc.) to support the project. Telecoms and cloud storage solutions will form part of the offer for start-ups.

Other partner organisations will also help to strengthen the programme, including the International University of Monaco and the Monaco Association of Chartered Accountants.