On 5 December 2017, the Council of the European Union published its lists concerning non-cooperative tax jurisdictions (black list) and those that had made commitments in this field (grey list).

It is with great satisfaction that the Prince's Government was able to note that Monaco no longer appears on these lists, due to its compliance with the criteria established by the EU.

These three criteria are defined by:

To draw up these grey and black lists, the European Union had established an assembly known as the "code of conduct group."  This group assessed 92 jurisdictions on the basis of the three above-mentioned criteria.

In this regard, during an interview for Monaco Info last December, Jean Castellini, Minister of Finance and Economy, welcomed this news and recalled that it was "the reward for many years of work."

As a reminder, in 2009, the Sovereign Prince had expressed the hope that Monaco would comply with international standards on transparency and the exchange of information in order to position itself as a stakeholder in this field.

Under this impetus, the work undertaken bore fruit, as in terms of transparency, the OECD gave a "largely compliant" rating to Monaco at the OECD World Forum in Jakarta in 2013.

Following this meeting, the Principality signed the letter of intent to accede to the OECD's Multilateral Convention on Mutual Administrative Assistance in Tax Matters.

Similarly, in terms of tax fairness, Monaco's economic model, which is based on the "Onshore" model, draws its strength from the residents who live, work and are consumers in the Principality.  The same applies to companies that produce in Monaco and contribute directly to the Principality's economic influence.

Finally, on 17 May 2016, the Principality made a commitment to adopt all the obligatory measures in the BEPS project, the aim of which is to combat the erosion of the tax base and profit shifting.

The BEPS refers to tax planning strategies that exploit gaps and differences in tax rules.  The inclusive framework brings together more than 100 countries and jurisdictions that work collaboratively to implement the BEPS measures and combat tax base erosion and profit shifting.

In conclusion, the Government notes, with satisfaction, this recognition for the work accomplished and will continue its action with a view to maintaining its compliance with international standards in this area via constant monitoring of developments in this field, which is currently undergoing international change. 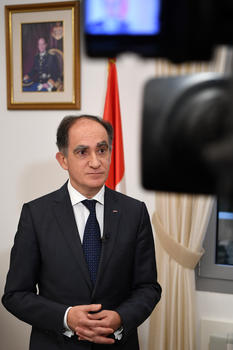 During an interview he gave to Monaco Info on this subject in December, Jean Castellini emphasised the “very great satisfaction after years of work, which we can acknowledge today.”
© Government Communication Department - Manuel Vitali

Read our previous article on this subject here