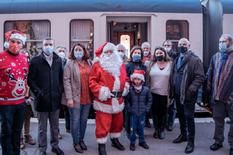 As he did last year, Minister of Foreign Affairs and Cooperation Laurent ANSELMI joined Alexandra VALLETA-ARDISSON, member of the French National Assembly for the Alpes-Maritimes, to take part in the Christmas for the children of Roya initiative, which is supported by the Principality of Monaco in accordance with the personal wishes of H.S.H. the Sovereign Prince. The initiative forms part of Monaco’s contribution to repairing the damage caused by Storm Alex last year. Simone PASTOR, who attended the event, was also one of the sponsors.

The day unfolded in three phases, or three successive stops of a “Father Christmas train”, specially chartered by the SNCF, a partner of the initiative, in Breil-sur-Roya, Fontan and finally Tende. Presents were handed out around festive buffet tables to children who attend schools in all of the communes in the Haute Roya region, in the presence of the local mayors and many elected officials.

Laurent Anselmi, who is familiar with the region, spoke to wish the children and local residents a Merry Christmas on behalf of H.S.H. the Prince and His Government. Alexandra VALLETA-ARDISSON made a point of thanking the Monegasque authorities, to the applause of those present.

On the margins of the event, Mr ANSELMI was able to hold discussions with Sébastien OLHARAN and Philippe OUDOT, the Mayors of Breil-sur-Roya and Fontan, Brigitte BRESC, the Mayor of Saorge, and Jean-Pierre VASSALLO and Daniel ALBERTI, the Mayors of Tende and La Brigue. Among other issues, the elected officials talked about the progress of rebuilding work and the daily lives of local people, stressing their morale and their faith in the future. 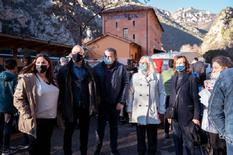