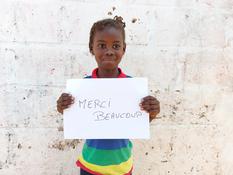 On Tuesday 30 March 2021, members of the Monaco Humanitarian Collective (charities, treatment centres and the Prince’s Government) held their traditional annual meeting, which took place online for the first time, to review the previous year. Despite the restrictions caused by the health situation, 12 children were able to receive surgery in Monaco and the Collective’s partner countries (France, Mali, Madagascar), bringing the number of children who have been treated since it was established to 440.

In spite of the challenges associated with the COVID-19 pandemic, first and foremost the closure of international borders, the Monaco Humanitarian Collective has worked hard to maintain its activities as far as possible.

While the number of children who received treatment fell compared with the previous year – 36 children in 2019 and 12 children in 2020, including eight operations carried out at the Monaco Cardiothoracic Centre and one at Lenval Hospital – the Collective has been able to adapt, seeking out alternative solutions including via a new partnership in Madagascar.

This new partnership with La Chaîne de l’Espoir at the CENHOSOA Hospital in Antananarivo is based on the same working model as the partnership that was set up in Mali. The hospital is a long-time beneficiary of support from Monaco’s Official Development Assistance Program, which, among other things, built and equipped an operating theatre and provided training for medical personnel.

Operations continued to be carried out in Mali during 2020, including two at the Festoc Centre within the Luxembourg Mother and Infant Hospital in Bamako. Ten operations were carried out in 2019.

Finally, 2020 drew to a close with the retirement of Dr François Bourlon, an icon within the Monaco Humanitarian Collective, who had reviewed all of the medical files and monitored all of the children treated by the Collective since it was established in 2008. His support and commitment have been invaluable, and everyone in the Monaco Humanitarian Collection thanks him sincerely.