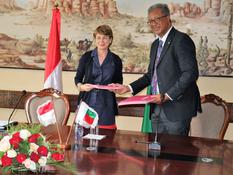 During her working visit to the Republic of Madagascar from 26 March to 2 April 2022, Isabelle Berro-Amadeï, Minister of Foreign Affairs and Cooperation for the Prince’s Government, signed the first framework cooperation agreement between the two countries on Monday 28 March.

Through the Department of International Cooperation, the Prince’s Government has been providing assistance to Madagascar for around 20 years, supporting projects on access to decent work, education, child protection, food security and health. Since 2009, Monaco has allocated 20 million euros in international development aid to bolster the socio-economic development of Madagascar, which is ranked eighth out of 180 countries in terms of vulnerability to climate change.

Two consecutive years of drought have now led to an unprecedented famine in the island’s Grand Sud region, which has been recognised by the United Nations as the first famine attributable to climate change. More than 1.1 million people are facing severe food insecurity. The signature of this cooperation agreement by Isabelle Berro-Amadeï and her Malagasy counterpart Richard Randriamandrato is evidence of the Prince’s Government’s commitment to Madagascar and particularly to the most vulnerable groups on the island.

“Even during times of crisis, the Principality of Monaco has always supported its partners in Madagascar. By signing this framework agreement, Monaco is confirming its enduring support for Madagascar as it implements its national policies to respond to the challenges of the country, which is facing an unprecedented crisis with several dimensions: climate, food, health and social,” said Ms Berro-Amadeï.

On the same day, the Sectoral Agreement on Health was renewed by Ms Berro-Amadeï and the Madagascar Minister of Public Health, Professor Zely Arivelo Randriamanantany, at the National Malaria Control Centre in Antananarivo. With ten projects supported by the Principality, health is a major area of cooperation, in conjunction with partners such as the Institut Pasteur, the Mérieux Foundation, the World Health Organization and the Ministry itself, notably on the universal health coverage project.

Bilateral cooperation between Monaco and Madagascar began in 2000. A Monegasque consulate in Madagascar was officially opened in 2002, with two permanent staff who coordinate programmes in the country.