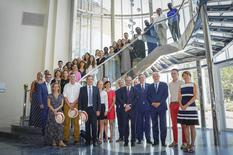 These Memoranda of Understanding formalise and deepen the relationships and joint strategies, and strengthen cooperation in favour of the most vulnerable groups of people in the priority countries* for Monaco’s official development assistance in the West Africa, South and East Africa and North Africa/Mediterranean regions.

The signatory organisations are all key longstanding partners of the Prince’s Government as part of its commitment to tackling poverty by 2030.

The event forms part of the Department of International Cooperation’s strategic plan for 2022–2024, approved by the Prince’s Government in March 2022, which reaffirms its commitment to working with seven European organisations that have strong expertise in areas that are priorities for Monaco:

- the Comunità di Sant’Egidio, to ensure that the most vulnerable groups, including refugees, can access basic services;

- the Mérieux Foundation, to improve access to health for all and strengthen local healthcare systems in countries where both parties operate;

- the investment fund Investisseurs et Partenaires (I&P, Investors and Partners), to support the economy and entrepreneurial trends in African countries, particularly among women and young people.

On this occasion, Ms Isabelle BERRO-AMADEÏ, Minister of Foreign Affairs and Cooperation, welcomed “the quality, reliability and professionalism of the partnerships forged by the Department of International Cooperation during the 15 years since it was established, of which today marks the culmination. The effectiveness of the Principality’s official development assistance policy is based on a partnership approach that is both sophisticated and local, the distinctive characteristics of Monaco’s international cooperation efforts.”