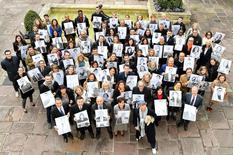 To mark International Women’s Day, on Friday 6 March the Women’s Rights Committee unveiled a work of photography at the Ministry of State by artist Anthony Alberti, also known as Mr One Teas. The unveiling was part of the #8MarsMonaco (#8MarchMonaco) initiative, which is this year focusing on equality at work.

The campaign is showcasing pairs of women and men (80 people in total) who do the same job, with 40 roles chosen to highlight gender diversity including in professions that are traditionally male- or female-dominated: construction site manager, gardener, bus driver, midwife, nursery school teacher, etc.

It is a continuation of the Monégalité charter launched by the Prince’s Government to promote gender equality at work.

All of those who had taken part in the campaign were also invited. In her speech, Céline Cottalorda noted that these people represented “Monegasque society in all of its richness and diversity.” She was also delighted “to see that women’s issues transcend divides and bring together such a willing coalition.”

The campaign has received support from many quarters, with Monaco’s football, rugby, basketball and volleyball associations all getting involved, including AS Monaco FC player Tiémoué Bakayoko and the Roca Team’s Wilfrid Yeguete, along with numerous representatives from Monegasque institutions.

The portraits are displayed on the Ministry of State, the National Council and Monaco City Hall, as well as in the Fontvieille shopping centre, at the Ste Dévote and Fontvieille roundabouts, at the entrance to the city and on smart bus shelters.

Keep up with the latest news about the campaign on social media using the hashtag #8MarsMonaco.