UN: International Day of Sport for Development and Peace 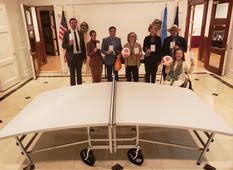 On 6 April 2022, to mark the International Day of Sport for Development and Peace, Monaco’s Permanent Mission to the UN in New York co-organised a virtual event focusing on “the role of sport in combating climate change”.

The event was also attended by Mr Boris Herrmann, skipper of Team Malizia from the Yacht Club de Monaco, the Deputy Secretary-General of the United Nations, and other UN officials and representatives from the sporting world, including an Olympic athlete and a Paralympic athlete.

The Mission of the Principality in New York also promoted the International Day of Sport by producing and distributing bibs with the event’s name and logo to diplomats, members of the Secretariat, and other partners, to encourage them to participate in sport and to post photos on social media. Monaco’s Permanent Representative also took part in a webinar organised by the Italian Catholic NGO Migrantes, which uses sport to promote the integration of migrants, and an event organised by the Permanent Mission of Hungary to present Teqball.

The date of 6 April was proclaimed the International Day of Sport for Development and Peace by a resolution of the UN General Assembly in 2013, negotiated by H.E. Ms Isabelle Picco, in her capacity as Co-President of the Group of Friends of Sport.