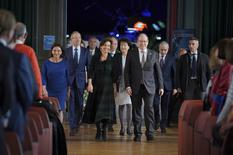 On Thursday 12 March, H.S.H. the Sovereign Prince opened the 10th International Monaco and the Mediterranean Symposium (RIMM) at the Oceanographic Museum, in the presence of Jacques Boisson, Secretary of State, Laurent Anselmi, Minister of Foreign Affairs and Cooperation, H.E. Yvette Lambin Berti, Ambassador and Monaco’s Permanent Representative to UNESCO, and many other dignitaries.

Founded by President and Director Elisabeth Bréaud, the symposiums, held every two years, aim to bring together experts from all backgrounds to reflect on the major contemporary challenges facing the Mediterranean region and come up with potential solutions. The events are open to the public. This year’s theme is “Taking Action for Heritage”.

The addresses at the opening conferences were given by Audrey Azoulay, Director-General of UNESCO, who thanked the Principality for its loyal and increasingly active support for all of the causes advocated by UNESCO, and by H.E. Laurent Stefanini, the French Ambassador to Monaco. Following the opening of the 10th Symposium, H.S.H. Prince Albert II awarded the 2020 RIMM prize to Audrey Azoulay.

Over the course of two days, intellectuals and artists from around the Mediterranean will take part in four roundtable discussions and report on the actions they have taken on the ground and their most recent achievements in safeguarding, rebuilding and restoring heritage, whether tangible or intangible.

At the symposium’s closing event on Friday 13 March, Ferid Boughedir’s film Halfaouine: Boy of the Terraces will be shown at the Variety Theatre in collaboration with the Audiovisual Archives Institute, followed by a discussion with the director.