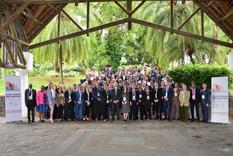 A delegation from SICCFIN took part in the Egmont Group Working Group meetings session, held in Mauritius from 27 to 30 January 2020.

The delegation played an active part in the various aspects of work, and in particular in a working meeting of the Egmont Group Circle of Financial Intelligence Units (FIUs), whose next meeting will be held in the Principality of Monaco on 28 and 29 May 2020.

At this meeting, Mr. Michel Hunault, the Director of SICCFIN, was appointed "coordinator" of the French-speaking FIUs.

As a reminder, the Egmont Group is an international organisation that is now comprised of 165 FIUs.  Its role is to combat money laundering and the financing of terrorism (ML/FT).