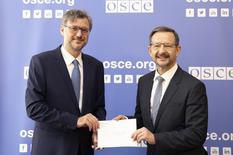 On 6 July 2020, H.E. Mr Frédéric Labarrère, the Principality of Monaco’s new Permanent Representative to the Organisation for Security and Cooperation in Europe (OSCE), presented his credentials to the Organisation’s Secretary-General, Mr Thomas Greminger, in Vienna.

The presentation ceremony was followed by a discussion during which Mr Greminger gave an overview of current issues and activities. Some of these have been impacted by the COVID-19 pandemic. He also offered thanks on behalf of the OSCE for the projects supported by the Prince’s Government, and specifically the project to combat human trafficking along migration routes in the Mediterranean. The partnership on which this project is based was renewed for two years in late 2019.

The Ambassador assured the Secretary-General of the Principality of Monaco’s full support for the OSCE’s actions under its mandate, and shared his desire to follow the work of the Organisation as closely as possible.

The OSCE is the world’s largest regional security organisation. It works to promote stability, peace and democracy for more than a billion people through a political dialogue based on shared values and principles, and through concrete missions on the ground.

Today, the OSCE tackles issues that affect our shared security, such as arms control, combating terrorism and illegal trafficking, managing energy and environmental security, strengthening the rule of law and good governance, and respecting the rights of national minorities and the freedom of the press.

The 57 member states of the OSCE all enjoy equal status and decisions are adopted by political consensus.