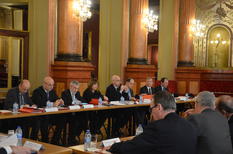 The Commission for Local Cross-Border Cooperation between France and Monaco met for the ninth time on 6 February at the Palais des Rois Sardes in Nice.

Established in 2005, the Commission meets annually, alternating between Nice and Monaco. It addresses practical issues of neighbourhood cooperation between France, the relevant regional communities (PACA Regional Council, Alpes-Maritimes Departmental Council, Métropole Nice Côte d’Azur, neighbouring communes) and the Principality of Monaco, particularly in the areas of land-use planning, housing and transport, the environment, health and social affairs. At this year’s meeting, cross-border cooperation procedures were also reviewed. The Commission is an integral part of the bilateral relationship, marked by a “common destiny”.

The meeting was co-chaired by Mr Bernard Gonzalez, Prefect of the Alpes-Maritimes, and H.E. Mr Laurent Stefanini, France’s Ambassador to Monaco, on the French side, and by H.E. Mr Serge Telle, Minister of State, for the Principality of Monaco.

The French delegation* included representatives from the prefecture authorities and the French Embassy in Monaco, as well as elected officials. The Monegasque delegation** featured ministers and senior civil servants from the Principality.

The Commission reviewed the issue of housing for employees and quickly set up a working group on the topic.

It also addressed the development of transport initiatives, first and foremost the reopening of the Beausoleil slip road which will link the A8 motorway to the Moyenne Corniche road, the expansion of rail transport and water shuttles as an innovative, alternative form of transport. Other questions reviewed included initiatives to improve traffic flow or safety (improving safety in the Rainier III Tunnel, park-and-ride facilities, development of the Brasca site).

The discussions also covered health and social affairs, including the proposed children’s day hospital, which is the result of a partnership between France, the Principality of Monaco and the Fondation Lenval (Lenval Foundation). The issue of employee secondments was considered.

On cross-border cooperation, the Commission reviewed prospects for development, including within a European framework. The two sides welcomed the growth in teleworking. They also discussed cooperation between fire and emergency services, and in police work.

Finally, in light of Brexit, which had taken place a few days earlier, the Commission considered the impact of this change on British nationals living or working in the Principality, and measures to be introduced to mitigate this impact.