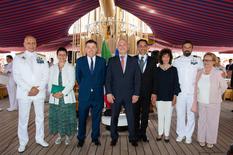 The Ministry of Foreign Affairs and Cooperation was recently honoured by the Italian Republic, with the award of accolades to several of the Ministry’s senior officials.

Minister Laurent Anselmi was presented with the insignia of a Grand Officer of the Order of the Star of Italy by Admiral Giuseppe Cavo Dragone, Chief of Staff of the Italian Navy, while the Ministry’s Director-General, Ms Isabelle Rosabrunetto, and Ms Marie-Catherine Caruso-Ravera, Director of Diplomatic and Consular Relations, were also made Officers of the Order.

The ceremony was particularly moving as it took place on board the Amerigo Vespucci, the Italian Navy’s training ship which is in the Principality as part of the International Hydrographic Organization’s centenary celebrations. H.S.H. the Prince, at the end of his visit to the prestigious vessel, was represented by Secretary of State Jacques Boisson.

During the ceremony, each of the recipients learned of the reasons that had prompted the Italian authorities to appoint them to this distinguished Order. In their unscripted responses, delivered wholly or partly in Italian, Mr Laurent Anselmi, Ms Isabelle Rosabrunetto and Ms Catherine Caruso-Ravera shared their feelings, recalling the Italian origins of their respective families now long established in Monaco.

The National Council was also honoured during the ceremony, as President Stéphane Valéri was made a Grand Officer and Vice-President Brigitte Boccone-Pagès a Commander in the Order.