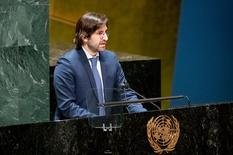 On 7 December, the United Nations General Assembly addressed an agenda item on the oceans and the law of the sea. Monaco’s Permanent Representation took the opportunity to reaffirm that the oceans are a central element of the global climate system.

Florian Botto, Second Secretary at Monaco’s Permanent Representation, stressed that long-term sustainable use of marine resources was impossible without protecting the environment and safeguarding biodiversity.

He also explained that the Mediterranean Sea was an integral part of the Principality’s identity and that Monaco had for several decades been committed to its preservation, including through the RAMOGE Agreement on marine pollution, the Pelagos sanctuary to protect cetaceans, the MedFund initiative on marine protected areas and the BeMed campaign against plastic pollution, as well as the recent initiative “The Mediterranean: a model sea by 2030” launched by France this year.