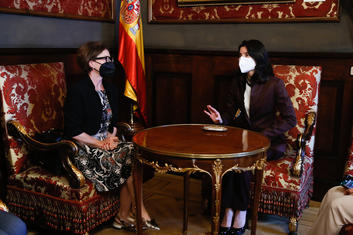 Monaco’s Ambassador to Spain meets President of the Senate

H.E. Ms Catherine Fautrier-Rousseau was officially received at the Spanish Senate on 15 April 2021, where she met President of the Senate Ms Pilar Llop Cuenca. The meeting was also attended by the President’s Chief of Staff, Ms Ana Maria Ovejero Puente, and the Director of International Relations for the Senate, Ms Sylvia Marti Sanchez.

The President first gave a detailed presentation of the Senate’s role and how it operates. A variety of subjects were then discussed, including the health situation resulting from the pandemic in Spain and Monaco. Opportunities for cooperation with Monaco at the governmental and parliamentary levels on studies currently being carried out by Spain regarding the evolution of women’s rights and gender equality were then considered.

Finally, the plans for commemorating the centenary of Prince Albert I’s death in Spain next year were presented. It was at the Spanish Senate that the international agreement establishing the Mediterranean Science Commission (CIESM) was signed in 1919. Prince Albert I, who was one of the founding fathers and the first President of the CIESM, visited Madrid in November 1919 with King Alfonso XIII to attend the organisation’s constitutive assembly.

Following the meeting, there was a tour of the Senate library. Established in 1834, the library has a collection of 307,000 works, including more than 125,000 incunabula (books printed before 1501), works from the sixteenth century, manuscripts, and more.