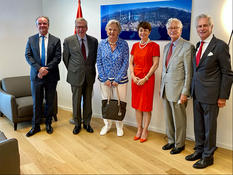 Monaco’s Embassy in Belgium organised a working meeting on 9 July 2021 for Monaco’s Honorary Consuls in Belgium, the Netherlands and Luxembourg.

An update on the COVID-19 pandemic was given, followed by a presentation covering the Prince’s Government’s latest news and priorities, as well as the actions that the Embassy plans to take over the coming months. There was a particular focus on the Principality’s efforts to protect the environment, emphasising the country’s revised target of achieving a 55% cut in greenhouse gas emissions by 2030. Also discussed at the meeting was Monaco’s determination to sustain and expand its digital model, as well as major public construction projects, including the Mareterra project, renovation of the Larvotto beach resort and progress on the new Princess Grace Hospital.

Developments in the negotiations on an association agreement with the European Union were also covered.

At the meeting, H.E. Ms Isabelle Berro-Amadei was keen to welcome Mr Johannes Leenders, who was taking part for the first time, having been appointed as Monaco’s Honorary Consul in Amsterdam on 30 March 2021.