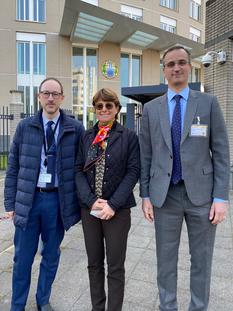 A delegation led by H.E. Ms Isabelle Berro-Amadeï took part in the work of the 25th Session of the Conference of the States Parties to the Chemical Weapons Convention in The Hague (Netherlands). Ms Berro-Amadeï was accompanied by counsellors Jean-Philippe Bertani and Johannes de Millo-Terrazzani.

Due to the health situation associated with the COVID-19 pandemic and to comply with current measures in the Netherlands, the conference was held across two sessions: one from 30 November to 1 December 2020, during which the organisation’s draft programme and budget for 2021 were adopted; and the other from 20 to 22 April 2021, at which the issue of the use of chemical weapons in the Arab Republic of Syria was on the agenda.

The Conference of the States Parties is the governing body of the Organisation for the Prohibition of Chemical Weapons (OPCW), whose aim is to work to eliminate stocks of chemical weapons and the threat of their use, and to encourage the use of chemistry for peaceful purposes.

The Principality of Monaco has been a member of the OPCW since 29 April 1997, the date on which the Chemical Weapons Convention entered into force, and is thus a founding member of the organisation. Since 2016, it has voluntarily contributed to the organisation’s Trust Fund for Syria Missions.