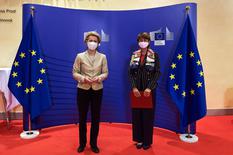 This ceremony completes the procedure to accredit the Ambassador as Head of the Mission of the Principality of Monaco to the European Union and the European Atomic Energy Community.

During the brief interview that followed the ceremony, the President of the European Commission expressed her admiration for the long-standing commitment of H.S.H. Prince Albert II to protecting the environment and combating climate change, areas that are also a priority for the European Union.

Ms. von der Leyen and H.E. Ms. Berro-Amadeï welcomed the excellent relations that exist between the Principality of Monaco and the European Union and agreed to pursue these relations in the same spirit.