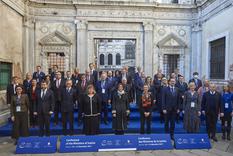 Although the process of restorative justice remains at an early stage so far in Monaco, as the country does not have a concrete general legislative framework that would enable its legal implementation, the Secretary of Justice noted that Monaco shared the aim of developing restorative justice. The substantive and productive discussions during the Conference will offer inspiration for future developments.

Member states unanimously adopted the Venice Declaration on the Role of Restorative Justice in Criminal Matters to promote the practice and expand its use by member states of the Council of Europe with a view to broad implementation of Recommendation CM/Rec (2018)8 of the Committee of Ministers concerning restorative justice in criminal matters.

Mr Gelli was accompanied by his advisor at the Department of Justice, Mr Richard Dubant.