Arrival of the "Monaco One" Shuttle Boat 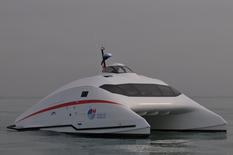 The high-speed shuttle boat "Monaco One," which has been acquired by the Monaco Ports Operating Company and will provide a service between Monaco and Ventimiglia for clients of the ports of Monaco and Cala del Forte, was transported by cargo ship from the port of La Rochelle, where she was built.  She will arrive at the port of Genoa on the morning of 4 February, where she will be unloaded and launched.

In the afternoon, or during the morning of 5 February, she will arrive in Port Hercule, in line with the terms of the acquisition contract.

She will remain there for a few days, while she is officially handed over and registered.  "Monaco One" will, in fact, be registered in Monaco, which will be her home port.

For a few weeks, she will be moored in the port of Cala del Forte in Ventimiglia, in order for final adjustments and sea trials to be carried out, particularly with regard to the route concerned.

She will return to her home port in Monaco shortly before her christening ceremony, which should take place at the beginning of March, if the health situation permits.

She will then be able to start her first regular service, so as to be fully operational for the forthcoming automobile Grand Prix in May.