"Rendez-vous aux Jardins" Garden Event : 5 and 6 June in the Principality of Monaco 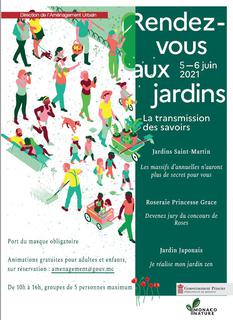 The "Rendez-vous aux Jardins" garden event, organised on the initiative of the French Ministry of Culture and the European Cultural Heritage Network (HEREIN), has been held every year since 2003, in early June.  The theme of this year's event is "The Transmission of Knowledge."

This annual event is an opportunity to introduce a wide audience to the beauty and diversity of parks and gardens via meetings and workshops.

The Principality of Monaco, which has been taking part since 2008, is offering the following free workshops for children and adults in three gardens this year:

The workshops will take place in the gardens, on the two consecutive days, from 10 a.m. to 4 p.m. They will be held by reservation only; requests must be sent before Friday 4 June to: amenagement@gouv.mc

In accordance with the health measures in force, groups are limited to five people and masks must be worn. The Department of Urban Amenities will provide the public with hydro-alcoholic gel.