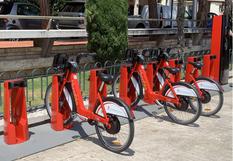 In July 2019, to encourage soft mobility and the use of bicycles in the Principality, the Prince's Government and the Monegasque Bus Company (CAM) gave new impetus to the self-service electric bicycles scheme by introducing a new MonaBike system, which includes:

Averaging more than seven journeys per bike per day, MonaBike is on a par with self-service bicycle schemes in major cities.

To continue this positive momentum and optimise the Principality's transport links, new stations will be gradually installed in the coming days at the Heliport, in the Ténao tunnel in Saint Roman, the Boulevard d'Italie, the Boulevard de Belgique, near the entrance to the Parc Princesse Antoinette, the Avenue de Grande Bretagne, the Rue des Lauriers and the Boulevard du Jardin Exotique, in front of the Ecole des Révoires school.

Soon, 43 stations and 390 MonaBike bikes will be available. Whatever their route in the Principality, users will thus find a station close to their place of departure and arrival.

Marie-Pierre Gramaglia, Minister of Public Works, the Environment and Urban Development, stated that, "The roll-out of MonaBike continues today and I am delighted, because this scheme, which has been a real success, is perfectly suited to short journeys in our city-State."

How does it work?