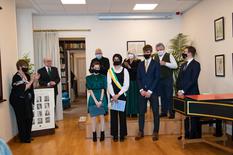 Three actresses from the Monaco-Ireland Arts Society then gave a staged reading of a short story by Frank O'Connor.

The afternoon came to a close with the presentation of an Irish cake, decorated with a shamrock, made by students of Monaco's Vocational and Catering School (Lycée Technique & Hôtelier de Monaco).

The library is under the aegis of the Princess Grace of Monaco Foundation, of which the Sovereign Prince is Vice-President.

As the evangeliser of Ireland, Saint Patrick is said to have used a shamrock to explain the concept of the Holy Trinity to the Irish during a sermon at the Rock of Cashel, thus making it the symbol of Ireland (the country's official emblem being the Celtic harp).

The Library in a few points: