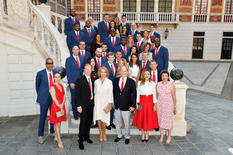 Late yesterday, the management and players of A.S. Monaco Basket were invited to the Prince’s Palace for a reception following the recently concluded basketball season.

In a speech, the Sovereign Prince congratulated the players and staff on the Monegasque team’s progress in the French Championship and the Basketball Champions League. He concluded by highlighting that the Roca Team had succeeded in generating widespread enthusiasm in the Principality.

A.S. Monaco Basket has just concluded their season in the Jeep Elite, where they lost the decisive match in the playoff finals by just two points. In May, the team also experienced a narrow defeat in the Europe Cup in Athens. Nonetheless, the Roca Team picked up its third Leaders Cup in a row and once again finished first in the regular season.